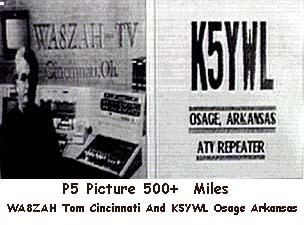 'Twas the night before Christmas and all through the

house not a creature was stirring 'cepting me in my shack. When all of a sudden there came

such a clatter, from out of the speaker came 2 meter chatter. With visions of DX dancing

'cross my eyes, I turned up my TV and was quite surprised! There were Iowa, Missouri,

too, it was certainly an ATV dream coming true! The Big Opening As some Atvers put it

days, this had to be the Granddaddy of ATV band openings; conditions not seen since the

great opening of Thanksgiving '86. Although contacts exceeding 2,500 miles have taken

place over water (Hawaii/CA-the Great-Granddaddy of ATV openings), it's pretty rare for

contracts exceeding 500 miles to take over land. These contracts took place with

frequency (144.34 Mhz) sounded like 20 meters during a rare DX pile-up. Video was flying

fast and furious on 439.25 MHz over a several-state area stretching from Arkansas and

Missouri all the way east to western New York State. There was a large high pressure area

centered over the region that produced clear, cold weather conditions with nearly 100%

humidity and no wind. Thick layers of frost settled over everything and a dense fog formed

over a large portion of the Midwest. This set up an incredible tropo conditions that

slowly worked itself toward the east over the next few days. Christmas Eve saw many

contacts between Ohio, Michigan, Indiana, and Illinois, as well as Iowa and the west.

Osage, Arkansas, with nearly P5 pictures exchanged (a distance of 540 miles;see Photo A).

Monday night and into the wee hours of Tuesday morning. The most notable contacts were

signals over 614+ mile path (see Photo B), and between WBOZJP (SK) and KA8VWV in Moundsville,

West Virginia, (P2 levels) at 535 miles. Many ATV repeater could seen across the region;

miles away. There was even one report that Columbus, Ohio,ATCO repeater was seen in Nashville,

Tennessee. By Tuesday evening there were dozens of ATVers still active (most with cases of

severe sleep-deprivation). This time contacts were made in a mostly north-south path

between Michigan, Ohio, Kentucky, and Pennsylvania. I was having fun working through the

WA4GSS repeater in Huntington, West Virginia. It was great to watch the local ATV gang,

miles). Just before midnight a front moved through the area and the band finally slammed

shut! It had been quite an adventure and once everyone catches up on their sleep I'm sure

they'll be looking forward to the next big DX adventure.

THE WALL OF SHAME

Making the List demonstrates you are a Complete Moron

Moron of the Month Award goes to WA0RCR


Deprecated: Directive 'allow_url_include' is deprecated in Unknown on line 0